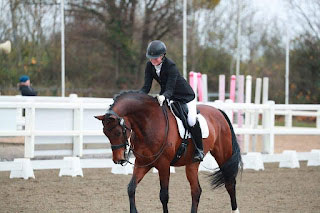 My name is Rafaella Bailey (Raffi for short) and I am a dressage rider based at The Talland School of Equitation in Gloucestershire. I have always had a huge love for horses and have been having lessons since I can remember. My mum’s best friend inspired me to get into teaching, so I moved to Talland in 2016 to train for my BHS exams, of which I have achieved BHS Stage 4 Complete (which is the old BHSII) and I am now training towards my BHSI. Although only one year was planned, I would not be where I am now without the help from everyone at Talland, especially Pammy Hutton and Pippa Hutton, both of whom inspired me to take up Dressage.

At Talland, I teach alongside grooming and riding for Pammy, and I am lucky enough to be able to compete on those wonderful horses. After meeting Anne Bondi, and riding in a SMART™ Elite Dressage Saddle, I am so excited to join the team as a SMART™ Ambassador. The SMART™ Elite Dressage Saddle is probably one of the most comfortable saddles I have ever sat in. I love that I can make little tweaks to help my position on the horse. Where it is flexible, I can get a really good feeling of what is going on underneath me, and it gives such a close feeling to the horse. With three horses out competing in British Dressage, from Novice to Advanced/Prix St George, only having to put one saddle into the lorry for the three of them is such a massive bonus and saves so much lorry space.

The first horse I would like to introduce is Gatsby (Platinum Furstensohn), he is an 18.2hh black Hanoverian gelding by First Heinrich whom I bought back in 2018. I quite often refer to him as an overgrown black Labrador as he follows me around absolutely everywhere. In 2019 we came in the top 10 at Sheepgate U25 National Championships at Prelim, and last year (2021) we finished top 10 at the Summer Area Festivals at Elementary. At home we are training towards Advanced Medium. The flying changes are quite difficult when your legs are so long! Last year we also tried our hand at Eventing, mostly because he loves to jump. At our last event I got rather wet, so it is safe to say I won’t quit my day job and turn into an Eventer. My plan this year is to qualify him for Summer Area Festivals at Elementary and Medium and to do an Advanced Medium by the end of the year, which will be rather emotional for me as he is my first horse that I have trained up the grades from a 5-year-old. Gatsby feels so happy in his SMART™ Elite Dressage Saddle, and it just adds to how much he feels like an armchair to ride. 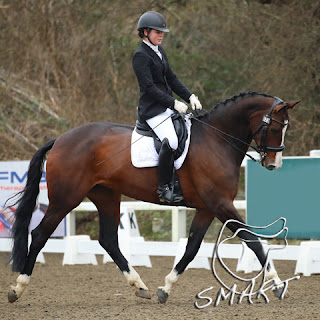 The next horse I’d like to talk about is Maddie (Kalosca) who is a stunning 17hh bay mare by Speilberg owned by Pammy Hutton. I have been riding Maddie since September 2019, not long after she had been backed as a 4-year old. In 2021, we competed at the Winter Area Festival Championships at Hartpury where we finished 4th in the Novice Silver and 2nd in the Prelim Silver. Later in the year get got a wildcard to go to Somerford Park for the Le Mieux National Championships at Prelim Gold, where we came just outside the top 10 in a very hot class. Maddie has not been particularly straight forwards and can be quite opinionated; I have always said that she is like myself but in horse form. However, she is the soppiest mare in the stable, you could sit in her stable with her all day long having snuggles. The aim with Maddie this year is Elementary Summer Area Festivals and to hopefully do some Mediums as well for the Winters. Alongside me riding her, she will also be doing Show Jumping with another rider this year. At home she has been learning the work for Advanced Medium. She shows such a talent for the lateral work and the SMART™ Elite Dressage Saddle helps so much with her freedom of movement along with allowing myself to be comfortable sitting her take on “flying” changes! 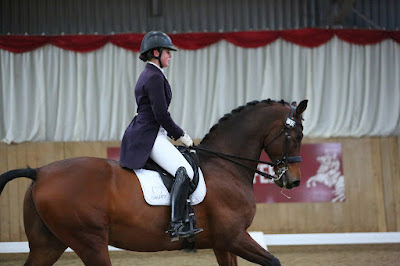 The final horse to introduce is the main reason that I decided to join the SMART™ saddles team and his name is Enjoy. Enjoy is a big moving 17.1hh bright bay gelding by Vivaldi, also owned by Pammy Hutton. Although I have known him the entire time I have been working for Pammy, I have only been riding him consistently for the last 6 months. He has got the biggest sense of humour I have ever seen and does come with a slight reputation of walking around arenas on his hind legs! Enjoy has competed to Prix St George/Inter 1 with his previous rider and he has taken me though my first Advanced Mediums and Advanced tests. No matter what interpretation of the test he decides he wants to do, which has included a Grand Prix Freestyle down the centre line of our Advanced Medium, he always leaves me laughing (and sometimes the judges as well).

There have always been issues fitting saddles to Enjoy due a bit to his conformation and lack of muscle behind his shoulder. Anne Bondi came out to see him, to try a SMART™ Elite Dressage Saddle on him. She talked me through everything about the saddles, how they fit and how they work. Safe to say I was hooked, it all made so much sense and the biggest plus is Enjoy absolutely loves the saddle. So much so that the last time I tried to ride him in something else, well “tried” is the best way to describe it really as it was not particularly successful. Enjoy does not keep his opinions to himself and is such a sensitive soul – he gives the best hugs when you’re in the stable with him.

Last week we received a Wildcard for the Winter Area Festival Championships at Hartpury in April at Advanced Medium which is super exciting. 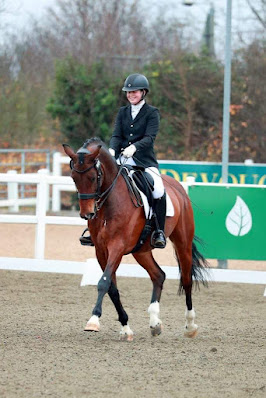