"I haven’t been lucky enough to have horses all my life, so was thrilled when I got my lovely Fell pony 'Wanda'. I had to use a saddle with an adjustable gullet as we knew that she would change shape as she hadn’t done a lot previously. A saddle fitter came out and suggested that as she is short-backed and very wide, she needed an XW gullet plate and a cob fit saddle, but the smallest size I could get was a 17” which was a little bit too long, but the only real option at the time.

As she progressed I got a saddle fitter out again and bought a traditional wide fit working hunter style saddle which seemed OK, but, after a few months when the physio checked her, she noticed that she had some muscle wastage to her lower back that was being caused by the saddle.

The barefoot trimmer we had begun to use also said that he felt that the uneven wear on her front hooves was due to the saddle not fitting correctly which was affecting her gait pattern. I began to look for a better saddle for her but this proved very difficult as, despite having a lot of advice and 3 different traditional saddle fitters out, none of the saddles seemed to fit properly - they all either slipped forwards or sideways, were too tight or were not comfortable for me.

I had thought about trying a treeless saddle but had heard mixed reports and also as I am just a ‘happy hacker’ I thought they might not be supportive enough for me. I did more research on the internet and came across the Solution Saddles website. I was very impressed with the saddle design and the fact that while the SMART saddles looked more like a traditional saddle, they were completely treeless and adaptable to any width of horse or pony. I contacted them and arranged a trial visit. 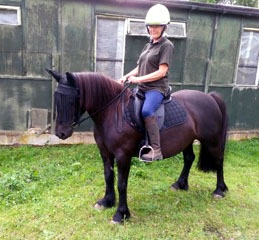 The home consultation visit was like a breath of fresh air after the previous trials I had with traditional saddle fitters. The SMART Approved Advisor brought several different saddles for us to try and when we decided which was the most appropriate, I had the opportunity to keep and try the saddle to do what I normally do in real life (lots of hacking and a bit of schooling); I didn’t have to commit to buying a saddle after only being able to try it for half an hour in the school.

The customer services team were extremely helpful, supportive and patient during the trial period, gave me lots of good advice and even allowed me to extend the trial period to try a different saddle when I felt that my original choice had not been quite right. It did take me a while to get used to the dressage length girth and tightening it up once mounted but even I have been able to manage that with practice!

I was a bit nervous about how it would feel having only ever ridden in treed saddles, but I was amazed at how secure and comfortable I felt while still being able to actually feel Wanda moving properly for the first time. Wanda now feels like she is walking actively rather than tip toeing as she was before. We have had the saddle about 6 weeks now and even my instructor has commented that she is lifting her back better as she is able to use her muscles properly.

The cost of the saddle did seem a lot compared to the other saddles I had tried but the fact that it is an excellent quality UK-made saddle, and won’t need constant adjusting/reflocking, meant that it would be cost effective in the long term. I also won’t have the hassle and expense of buying/selling/part-exchanging saddles as I have had to do until now. The fact that the SMART NATIVE VSD saddle is quite lightweight in comparison to a treed saddle is a bonus as well when having to lift it in and out of the car and carry it to the yard every day.

Now that we have at last got a saddle that works for both Wanda and me, I am looking forward to improving my riding and Wanda’s schooling, and maybe might even try something a bit more adventurous than hacking in the future! To sum up I would say that SMART saddles are not just sports saddles, but are very versatile and suitable for a wide range of horses and riders."