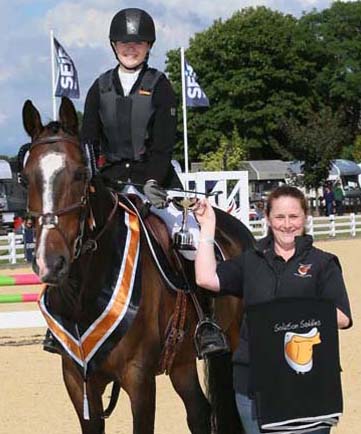 Rachael Brown (EBW) has been involved with horses for over 29 yrs having started on ponies at the age of 6. She is a qualified Equine Body Worker (Equine Sports Massage Therapist).

It was as a result of a sacroiliac injury to her own horse that lead her to SMART saddles. For a number of years she had not been truly happy with any of the saddles that had been fitted to him (of which there were many!) and as a result his back had been slowly atrophying over a period of 3 years and eventually he went lame behind. Rachael decided to go down the RigidFree saddle route and hasn't looked back since.

Her horse, Wals, is a Welsh cob x Thoroughbred and apart from the atrophy has large wide shoulders and a very small area to fit a saddle – not a problem for a SMART saddles! His dressage marks have gone from 5’s & 6’s to 7’s & 8’s since investing in his SMART saddle.

Rachael also jointly owns a Welsh D and he loves the SMART saddle too. Previously he would buck and be generally unhappy in his saddle. There was no way he could carry a forward cut treed saddle due to his very wide, no withered, short backed welsh cob conformation, but he his very happy in his flexible SMART Jump saddle.

When Rachael visits horses for a massage session she says that a very large proportion of their problems relate to the saddles they are being ridden in. As an agent for Solution Saddles and a massage therapist Rachael hopes that more horses in the world will become happy and comfortable in whatever they do whether it is anything from hacking to eventing.